So, today I've been having period pain so bad I felt as though the entire left side of my abdomen was going to explode, making it Opiates or Death time. Blargh.

Possibly as a result of this, I did something I swore I was Never Going To Do Again, and booted up the very terrible Sims Medieval. Much ranting on irc occurred, since I couldn't remember anything about how it works. The camera mode is greatly restricted compared to Sims 3, and while the Medieval sims look like Sims 3 sims, they aren't - if you take a sim created in one game and put it in the other, you get HORRIBLE MUTANTS. I didn't even remember that Medieval is the world's stupidest version of The Sims, since you can't actually build anything, which is the Fun Part. Also, while I've long known suck at making characters who look like real people, I'd have thought that making a character from one game in another game would be easier. Not even SLIGHTLY!

Anyway, thanks to Tailon on PokeCharms, who has a *very* good eye for attention to detail, this happened: 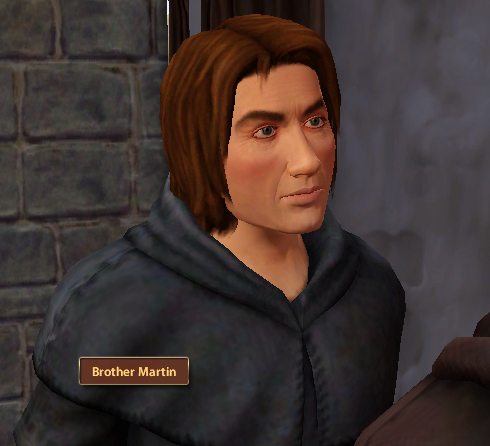 He's still not perfect: in particular his nose is too long and mouth are too wide, since apparently Medieval Create-A-Sim lies, but that's very recognisably Martin Septim.

Sexist bastardJames Watson on The Double Helix and his changing view of Rosalind Franklin. I still want to spit at him, but I suppose he comes across as slightly less objectionable when all the evidence is considered. Bah.

More than you maybe needed to know about the echidna. Warning: Contains echidna penis. Once seen, can never be un-seen!

Protein art. This is also Relevant to My Interests.